DID YOU KNOW THAT BILLY MILLER… 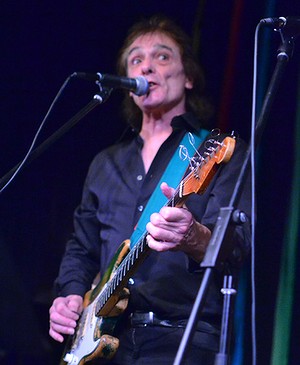 BILLY MILLER is primarily known for being in the 70’s group THE FERRETS, however as most musicians do, he has also been a member of other well-known bands and co-written music with credible artists.

Billy was once a member of Aussie hard rock band BUSTER BROWN back in 1975 for a short time with Angry Anderson at the helm. This was Anderson’s third version of the band with Ken Firth on bass guitar (Tully), Billy Miller on guitar and vocals, Dave Springfield on guitar and drummer Dallas ‘Digger’ Royal (Band of Talabene). Firth, Miller and Springfield were no strangers either as they all of had previously worked together on the stage production of ‘Jesus Christ Superstar’. Of course they all went on to form The Ferrets shortly after in the same year.

His other groups also include BILLY MILLER’s GREAT BLOKES and THE SPANIARDS known for the popular song ‘I Want To Live In A House’ which was featured in the Australian movie ‘Starstruck’ in 1982. The Spaniards biggest hit was ‘God is a shield’ which charted at number 54 in 1984.

Fast forward to 2014 and Billy teamed up with ARIA award winner and good mate PAUL KELLY to co-write ‘Don’t Let a Good Thing Go’ which featured on Kelly’s ‘The Merri Soul Sessions’ album. He also co-wrote four of the songs on Kelly’s 2017 ‘Life is Fine’ — ‘Rising Moon’, ‘Firewood and Candles’, ‘Rock Out on the Sea’ and ‘Leah: The Sequel.

You can catch Billy perform with his band The Love Brothers at MEMO Music Hall on SUN 25 FEB from 3pm. BOOK TICKETS HERE

CHECK OUT WHAT ELSE IS COMING UP @ MEMO!