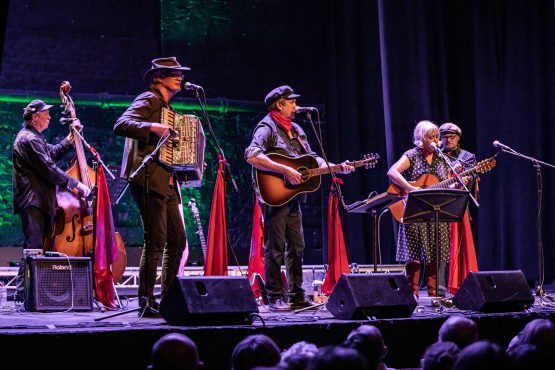 Bruce Hearn & The Machinists celebrate their new album “LIVE AT THE ATHENAEUM: A TRIBUTE TO WOODY GUTHRIE” tipping their hats to the “the most real songwriter of the 20th Century”. The live stream show also features special guests; MARGRET ROADKNIGHT, KERRI SIMPSON and JAN ‘YARN’ WOSITZKY ( founder of the legendary Bushwackers).  The show and album are also a celebration of the Australian folk scene, and a return to the folk tradition for an unsung hero of Australian roots music, Bruce Hearn, of pioneering and politically charged Melbourne ska band Strange Tenants.

Singer/songwriter, multi-instrumentalist, labour activist and one-time ‘kidnapper’ of Prime Minister Malcolm Fraser, Bruce Hearn returns to his first musical love, folk music, with “Live at the Athenaeum: A Tribute To Woody Guthrie” released as a 2LP set, a 2CD and digitally on October 2, 2020.

A former student activist (see Fraser ‘kidnapping’ details below!) and union rep, and now a Senior Lecturer in Industrial Relations, Bruce came to prominence as a musician in the ‘80s as a singer/song writer for pioneering and politically charged Melbourne ska band, Strange Tenants, who were hugely popular live and on record, and who toured with the likes of U2, UB40 and Jamaican reggae legend Jimmy Cliff.

A fan of folk music since his parents took him to see Pete Seeger play in 1968, and more recently the leader of Australian Blues Music Awards-nominated finalist for best album and band, Hurricane Hearn, Bruce cut his musical teeth on the Melbourne folk scene of the early ‘70s, performing at coffee houses and protests. Bruce is an unsung roots renaissance man whose musical palate had always looked beyond the ska sounds of early ‘60s Jamaica and early ‘80s London.

Bruce Hearn & The Machinists’ “Live at the Athenaeum: A Tribute to Woody Guthrie” features guest appearances from a host of local folk and roots greats including Eric Bogle (“And The Band Played Waltzing Matilda”), Margret RoadKnight (“Girls in our Town”), Mic Conway (frontman of the legendary Captain Matchbox Whoopee Band), Jan ‘Yarn’ Wositzky (of The Bushwakers), ARIA Award-winner Kavisha Mazzella and ARIA Award-nominee Kerri Simpson, as well as the thirty-strong Victorian Trade Union Choir. The double-vinyl and double-CD set was released October 2, and will be followed in the new year by Bruce’s first solo studio album “The Word Is The Music The People Are The Song”. Both will be released on Bruce’s own new label ISKRA Records; ISKRA means ’spark’ and was the name of the Bolshevik newspaper which launched the Russian revolution in 1917!

“This is just a reminder of how authentic and real his songs were. The music and the lyrics – the poetry. And the stuff he sung about – about ordinary people, against war, against fascism, against racism and bigotry. All these things are so important again today, and I thought it was about time we celebrated him again. And introduced him to those who don’t know. The great Woody Guthrie. Because he was the most real songwriter of the 20th Century.”– Bruce Hearn

“Bruce and his fellow travellers evoke the spirit of Woody Guthrie with love, passion and purpose” – Anna Kokkinos, Film director (Head On, Book of Revelation, The Hunting)

“What a triumph your Woody show was! Fan-fucking-tastic!’ – Peter Foley, the Caravan Club

A note from MEMO:

MEMO are getting a lot of enquiries about our Live Streaming and we want to look after our MEMO faithful so book sooner than later to help ensure you have sorted any technical issues prior to the live stream date/time and ample time to receive your confirmation email with link and password.

To keep updated about all future Live Streaming concerts at MEMO visit MEMO’s website and Facebook Page and for updates.

We want to ensure our MEMO faithful get the best steaming experience, so if you encounter any issues, please visit the FAQ page, or email Rod at livestream@memomusichall.com.au.

This is the only gig for “A Tribute to Woody Guthrie” by Bruce Hearn & The Machinists + guests, better be quick!