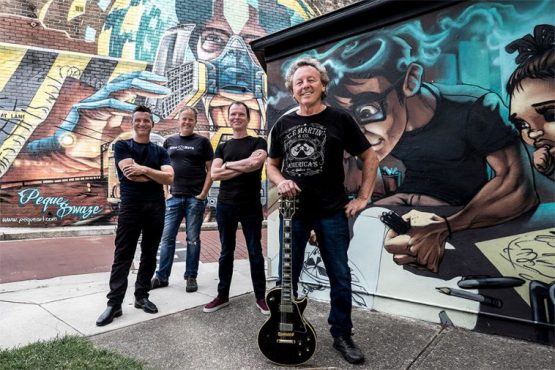 ARIA winning composer, Mario Millo brings his band to MEMO direct from sell-out concerts in Tokyo and Sydney for his one-off in concert performance of “Four Moments” (one of “Sebastian Hardie’s” critically acclaimed Albums), plus works from Mario’s extensive musical career.

MARIO MILLO was founding member, guitarist, singer of one of Australia’s finest progressive rock bands: Sebastian Hardie, that formed in 1973 and disbanded in 1975 reuniting at brief times until 2018. In that 45 year time period, there was a feature performance at Progfest Los Angeles, support performances for Santana, Lou Reed, Osibisa, Yes and a one off sell-out performance in Tokyo in 2018.

Between 1973 and 1975 Sebastian Hardie produced four critically acclaimed Albums, the most famous “Four Moments” which peaked at number 13 on the Australian charts. All albums were released in Australia and overseas.

Since 1976, Mario went on to write award winning film and television soundtracks including Against The Wind with Jon English, producing the Chart Hit Six Ribbons which was was translated into Mot Alla Vindar and peaked at #1 along with the Album in Norway. Other film/TV show soundtracks Mario wrote the music for included: The Light Horsemen, Brides Of Christ, A Fortunate Life, and Changi.

On Friday 14 February; We are in for something special – a one-off concert performance of Four Moments, one of Sebastian Hardie’s critically acclaimed albums, plus works from Mario’s extensive musical career.  This rare event will be recorded live, and is not to be missed!

“I’ve been waiting 45 years for to perform the Four Moments album in concert, and I can’t wait to perform it live at MEMO Music Hall” …Mario Millo

This is the only gig for An Evening With Mario Millo, better be quick!