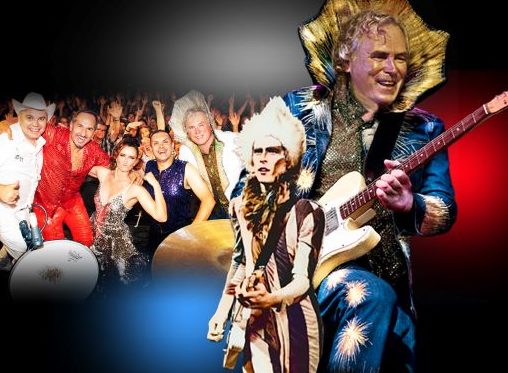 Due to popular demand we pleased to announce a SECOND show for BOB’ BONGO’ STARKIE’S SKYHOOKS SHOW – a celebration of the music of SKYHOOKS.

BOB ’BONGO’ STARKIE – the guitarist from the legendary SKYHOOKS performs the classic songs and a few more that need to be heard, in a personal celebration of one of Australia’s most beloved bands. In between songs Bob shares Humorous anecdotes and Insights into the inner workings of the SKYHOOKS.

‘We have a female singer only because no male can match ‘SHIRLEYS’ Vocal range and they are so much better to look at, so no apologies there.’(Bob)

Skyhooks helped change the face of rock n roll in the 1970s with #1 and Top 10 singles to their credit, as well as two of the country’s biggest selling albums, Living in the 70s and Ego is Not A Dirty Word. Both produced by Ross Wilson and received incredible reviews.

Skyhooks have been described as ‘giving the Australian music industry the enema it needed’ when they smashed onto the scene in their colourful cos-tumes, wearing make-up well before other bands tried it. Living in the 70s was their debut album, Ego is Not A Dirty Word released a year later and it wasn’t long before the five members of the bands were celebrities – Shirley, the enig-matic curly-haired lead-singer, guitarist Red Symons, guitarist Bob Starkie, bassist and songwriter Greg Macainsh and drummer Fred Strauks. They re-leased killer singles such as Horror Movie, Ego (Is Not A Dirty Word), Women In Uniform and Jukebox in Siberia, to name a few, and are one of the few bands who have been a permanently on rotation on radio stations around the country for decades. Skyhooks were inducted in the ARIA Hall of Fame and ceased tour-ing together after the death of lead singer Shirley in 2001.

Skyhooks had six tracks from their first album Living in the Seventies banned from radio. One of which was ‘You just like me cos I’m good in bed’ -the first track to be played On Double J radio station when it started in Sydney.(Jan 1975) For more info on Skyhooks go to http://www.skyhooks-music.com/history.html