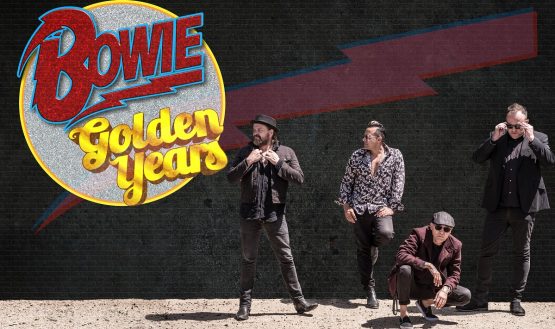 “I don’t know where I’m going from here, but I promise it won’t be boring.”  David Bowie

Following its SOLD OUT debut in 2019, BOWIE: GOLDEN YEARS has become an annual celebration paying homage to the epic career spanning music of rock and roll legend, DAVID BOWIE.

“Being just a fan of Bowie is not enough, somehow we need to get inside each song – that is the joy of this musical journey.” Rusty

BOWIE: GOLDEN YEARS celebrates the breadth of BOWIE’s musical styles from Rebel Rebel, Jean Genie and Space Oddity to Heroes, All The Young Dudes, Modern Love, China Girl, and Where Are We Now.

Backed by an incredible band comprising some of Australia’s premier musicians, including BABY ANIMALS DAVE LESLIE on guitar and
TAXIRIDE’s SEAN McLEOD on drums, such epic line-up of artists in their own right is required to ensure justice is done to the variety and depth of David Bowie’s music.

“There (is) an amazing chemistry with these guys…they play as one (and) sound like a band who has played together for years. The songs are solid.”  Paul Cashmere | Noise 11

BOWIE: GOLDEN YEARS is not just a show, this is a triumphant celebration of Bowie’s epic career spanning music.

“This is a show I’ve wanted to do my whole life and I just love sharing it.” Dale Ryder

DALE RYDER – BOOM CRASH OPERA, a band that reached No. 5 on the ARIA chart with the debut single Great Wall. Their album went Gold and their second album spent more than 12 months in the Top 40 with many Top 10 singles. Dale is a full-time performer who gets every crowd in the palm of his hand!

JASON SINGH first entered the charts at Number 1, with TAXIRIDE and their multi-platinum debut album ‘Imaginate’. A rigorous touring schedule had them perched at the top of the Australian music tree culminating in the release of their smash hit ‘Creepin’ Up Slowly’; the Number 1 Australian Airplay song for 2002. Jason has released two solo album, ‘Humannequin’ in 2013 and ‘VALE’ in 2018.

TIM WATSON topped the charts in the ARIA Award winning band TAXIRIDE with a number 1 and number 5 album & 7 Top 40 singles including chart smashers “Get Set”, “Everywhere You Go” and “Creepin’ Up Slowly”. He travelled the globe playing across Australia, Europe, Japan & the U.S. also supporting Tina Turner throughout her sold-out European tour. Tim rocks every performance, commanding the stage and thrilling audiences far and wide.

We are getting a lot of enquires about our Live Streaming and we want to look after our MEMO faithful so book sooner than later to help ensure you have sorted any technical issues prior to the live stream date/time and ample time to receive your confirmation email with link and password.

PLEASE VOTE FOR MEMO HERE FOR THE ‘TIME IN AWARDS’

This is the only gig for Bowie: Golden Years, better be quick!