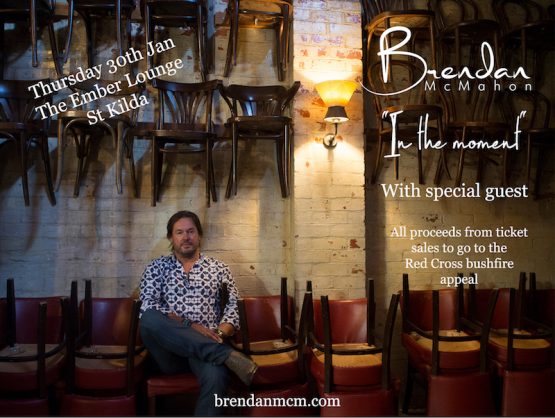 Brendan McMahon, Australian alternate country rock artist, will be playing at MEMO to help raise funds for bushfire relief. All proceeds from tickets will go to the Red Cross Bushfire Appeal.

BRENDAN MCMAHON with be showcasing tracks from his new album “In The Moment” along with material from his back catalogue. This event, which will include a very special guest performance by JASON VORHERR & GEOFF WELLS (DAYRL BRAITHWAITE band) and ROSE ZITA FALKO, is focused on raising much-needed funds to help with the devastation of the recent bushfires.

“Whatever it is that makes his music just so amazingly addictive, the American audience is not only ready to take Brendan McMahon in as one of their own, but they’re ready to catapult him to a level of fame that he hasn’t already previously known in his already well accomplished and hard-fought career in this business.” – Cash Box Magazine, Canada,

We are pleased to announce this event has burst out of the Ember Lounge into the big MEMO Hall. Tickets are selling fast, so don’t miss your opportunity to be apart of this unique event!

This is the only gig for Brendan McMahon “In The Moment”, better be quick!

This is the only gig for Brendan McMahon “In The Moment”, better be quick!