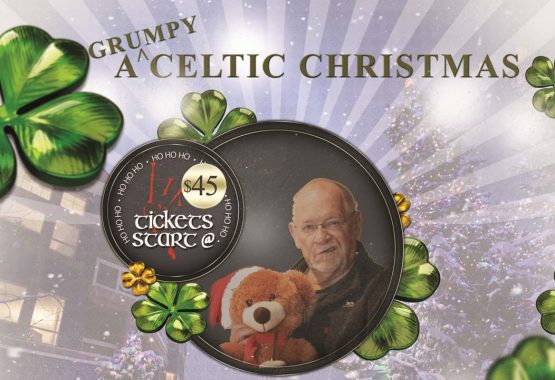 Audiences are in for a Celtic treat this December as, Claymore and Eric Bogle join forces at the Memo for a one night only Christmas extravaganza, “A Grumpy Celtic Christmas”.

Considered two of Australia’s top artists, along with the incredible Glenbrae Celtic Dancers, the event will showcase the best of Celtic entertainment. Because Eric and Willy are often considered Bah Humbug when it comes to Christmas festivities, hence the “Grumpy Celtic Christmas”, tag… Rest assured it will be anything but! They will put on their best smiling faces for this one night only, so it will be the place to be for fun, laughter great music and dance to help us celebrate a great time of the year.

ERIC BOGLE is internationally respected and has been touring the world for the past four decades, from outback Australia to the streets of New York City. In 1986, he was recognised with a United Nations Peace Medal for his contribution, via music, to the cause peace, and in 1987, he was awarded an OAM for his services to the entertainment industry. There is little that Eric Bogle hasn’t achieved throughout his extensive career. He has undertaken eight tours of North America, 11 tours of Europe, four tours of New Zealand and countless Australian tours to boot. During this time, he has played at iconic festivals such as Edinburgh Fringe Festival in Scotland, Festival Interceltique De Lorient in France, as well as Port Fairy and Woodford back home, to name a few.

Celtic rockers CLAYMORE need little introduction to audiences. Heralded as one of the world’s premier Celtic rock bands, an evening in their company is always an unforgettably loud experience. Claymore’s live shows demand that you are on your feet from the outset. This enigmatic band of multi-instrumentalists not only manages to combine traditional elements of Celtic music, but they take that passion and soul and rock it right into the 21st century. Few bands can pull off the sensitive task of re-educating the traditional realm into the modern day, but that’s something of a specialty for Claymore. Not only that, but they manage to write beautiful original Celtic compositions, and even lend their style to some power rock classics, all with an Irish and Scottish twist.

There is little that Claymore haven’t done throughout their career. They have a host of impressive album releases under their belt and a long list of festival performances to their name, including headlining position at Australia’s largest folk event. Since the band’s inception more than two decades ago, they’ve released five impressive albums, and performed internationally from gigs in New York, Scotland and New Zealand, to several headline appearances at the reputed Festival Interceltique De Lorient France. Combine this with performances at the biggest festivals on the Australian circuit such as the Queenscliff Music Festival, Big Blues Day Out, Perth International Arts Festival and Brunswick Music Festival to name a few, and you’ve got an impressive musical resume.

Glenbrae Celtic Dancers
Highland dancing encourages confidence in each participant, it teaches discipline and pride in the Culture and it ensures friendships of likeminded individuals the world over. Within the discipline  Our dancers have opportunities both in a competitive and non-competitive environment. Our dances Depict the legends and images of Scotland’s rich history. From the sword dance depicting the battles Of Culloden to the rich history of Bonnie Prince Charlie, each dance has a story that can be told. Each choreography depicts these stories. Glenbrae are one of the last remaining groups in the world to still wear the Scottish Full Kilt and we wear our full uniform with pride. We are a high energy Group of dancers aiming to maintain the traditional dance form but incorporating modern Choreography.

The All American Blues Conference 2020