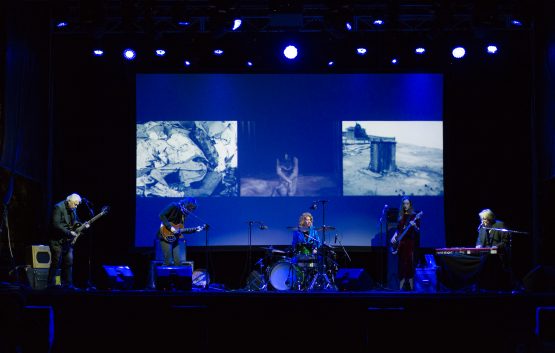 It will have been a year since David Bridie’s show headlined the Castlemaine State Festival and he is very much looking forward to performing “The Wisdom Line” on the MEMO stage in 2022 with a full band including Not Drowning, Waving guitarist John Phillips and long-time collaborator Phil Wales.

David Bridie is one of Australia’s most prolific and respected songwriters. He has produced six studio albums with Not Drowning, Waving and seven more with beloved, recently retired group My Friend the Chocolate Cake, as well as innumerable film and television soundtracks. A great teller of Australian stories, David’s immersive, richly textured and sophisticated song-writing shares stories and asks questions with passion, integrity and humility.

Released in March 2019, The Wisdom Line is David’s widely acclaimed sixth solo album release – the album explores themes of Melbourne, asylum, home, the transience of our relationships, and trying to make genuine connections in an interconnected world where everyone is talking on their phones.

“Gorgeous washes of melancholy electronics; minimal piano and percussion accompaniment; thoughtful understated lyrics and a clear understanding of the compelling ambience that can be created by the interplay of lyrics, music and images.” – The Age/Sydney Morning Herald

Each of the 11 tracks featured on The Wisdom Line have been paired with a short film, directed by a selection of dynamic local and international filmmakers and visual artists including Andrew Wiseman, Stephanie Gould (USA) and Matej Kolmanko (Slovenia). Hobart-based multimedia artist Keith Deverell’s visual interpretation of the track ‘She’s Upped and Gone’ shows a beautifully abstracted film piece that doesn’t distract from the story, but allows you to lean in and watch. Matej Kolmanko’s ‘The Abyss’ presents a triptych of archival footage illustrating elements of ordinary life, quirky imagery and fast-paced streetscapes.

The Wisdom Line as a performance takes all of the films created especially for the album and integrates them into the set, projected onto a screen for the length of the show. Featuring a four piece live band, The Wisdom Line is a truly immersive project combining filmmaking, soundscapes, music and spoken word elements.

“Even when it’s not composed for film or television, David Bridie’s music radiates cinematic characteristics….intensely moving” –  The Australian

This is the only gig for David Bridie presents ‘The Wisdom Line’, better be quick!

This is the only gig for David Bridie presents ‘The Wisdom Line’, better be quick!