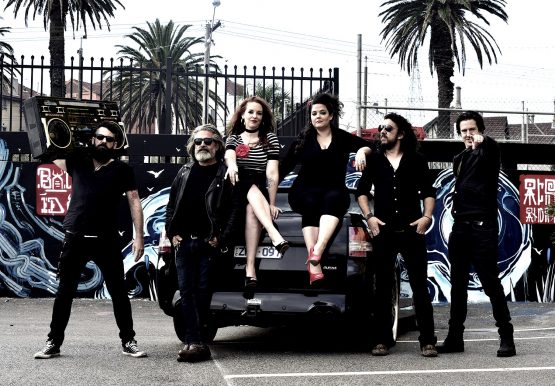 This 4th Studio Album ‘Just for Kicks’ is a definite departure from the bands previous dark offering of ‘Sun City White’ and if anything is a throwback to early Australian rock bands such as Australian Crawl, The Angels and The Divinyls.

Dirt River Radio shares members from Electric Mary & 28 Days and this line-up of two guitars, bass, drums and the magnificent `Dirtettes’ on backing vocals is the best incarnation yet. ‘The Dirties’ have evolved from humble St Kilda beginnings into a world-class rock n roll outfit (two European tours under their belts). Their classic sound will deliver to you a swag of heartfelt tunes and at times brutal snapshots of reality, they’re also renowned for their wildly volatile, no punches pulled live shows and when you get to know them, true gang mentality.

The DIRT RIVER RADIO troubadours have shared the stage w Jim Ward (At The Drive-In), Carlos Santana and Chris Isaak among many others that never fail to win over each audience.

With over 300 shows under their belts and two international tours, the best is yet to come with Sun City White.

This is the only gig for Dirt River Radio Album Launch, better be quick!