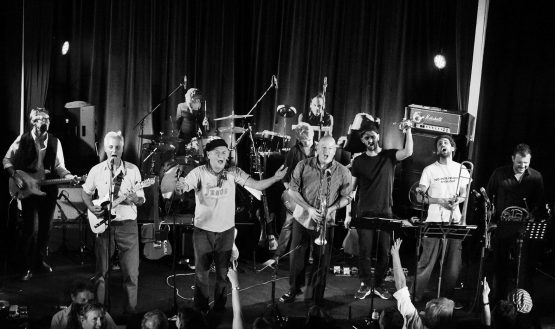 The fabulous JACK HOWARD and big band return to MEMO with his mighty EPIC BRASS show!

Jack Howard’s Epic Brass is a celebration and an exploration of the great horn hits and hidden gems of Australian rock – from Hunters and Collectors and the Oils to The Saints, The Laughing Clowns and Painters And Dockers, the show features an incredible set list of killer brass tunes.

Jack plays trumpet in Hunters and Collectors and wrote and arranged most of the band’s iconic horn lines. Along the way, he’s also played with The Violent Femmes, Rodriguez, You Am I, The Living End and a host of others. Throughout 2017, Jack toured the world with Midnight Oil as their trumpeter/keyboard player/percussionist.

Jack is joined on stage by a cavalcade of guest singers – Paul Dempsey (Something For  Kate) Paulie Stewart (Painters And Dockers), Steve Lucas from X, Penny Ikinger (Wet Taxis) and Melbourne sensation Fiona Lee Maynard bring their style and their energy to this uniquely powerful show; and Sean Kelly from Models makes a welcome return to the Epic Brass fold for this upcoming Memo show. The Epic Brass band is sensational and features a mighty five-piece horn section.

This will be the last Epic Brass show before H & C head out on tour from early January to late April. Don’t miss out!”

EPIC BRASS was originally launched to a capacity crowd at MEMO in July 2016 and it was an unforgettable night. For many punters, it was the gig of the year. Here’s a typical reaction – “Often when you’re expecting something to be great, it doesn’t meet expectations. Last night, Jack Howard’s Epic Brass show high-jumped over expectations, then did a triple somersault with a perfect landing. Congratulations, Jack and everyone involved! Still buzzing about it today.”

This is a unique show full of POWER and PASSION  – and HORNS! DON’T MISS OUT!

If you don’t have your tickets already, I would get onto it straight away. It’s going to be a night to remember!

This is the only gig for Jack Howard’s
Epic Brass, better be quick!