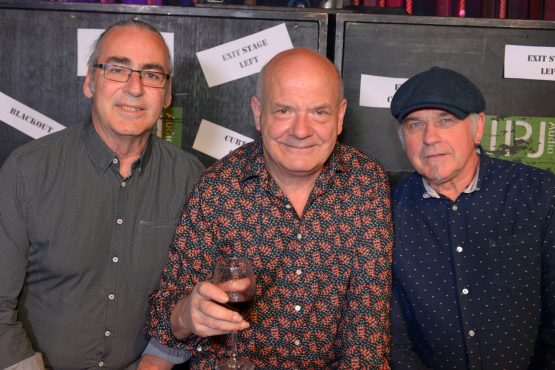 Fields, See & Mason will make their debut performance in the Ember Lounge, performing original renditions of Aussie hit songs from their new album “Down Under The Covers”.

Lindsay Field (NZ), Sam See (Australia), and Glyn Mason (UK) have sung and played in some of Australia’s biggest acts over many years.

Between them, they have backed the greats such as Farnham, Cadd, Shorrock, Chain, Ariel and Flying Circus.

The trio’s years of friendship and love of singing together led to the creation of Field, See & Mason to showcase their distinct harmony blend, inventive acoustic rock guitar arrangements and a high energy musical experience.

Down Under The Covers is their latest collaboration and CD. It reimagines Australia’s favourite hit songs, from Midnight Oil and Divinyls to Paul Kelly and AC/DC.  The CD was recorded and filmed before a live audience in Melbourne and launched to great success on 2016’s sold out Cruise ‘n’ Groove music cruise out of Sydney. Don’t miss the Memo debut of their Rock The Boat show, “Down Under the Covers” where the trio sing reimagined Australian classics.

OTHER SHOWS COMING UP AT MEMO

This is the only gig for Field, See & Mason “Down Under The Covers”, better be quick!