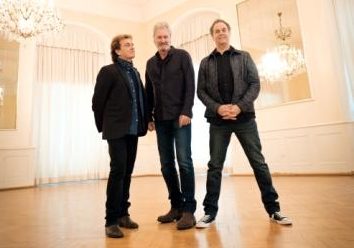 FRONTM3N are Peter Howarth, Mick Wilson and Pete Lincoln.  Known respectively as lead vocalists of The Hollies, 10cc and The Sweet, three great friends perform the classic hits of these iconic bands with three guitars and three amazing voices.

The ‘All For One Tour’ showcases the exceptional combined talents of three superb musicians, in the intimate atmosphere of an exclusive acoustic concert, filled with music, stories and humour.

Recent triumphs include touring extensively in Germany and Scandinavia to sellout crowds and performing live in front of millions from the Brandenburg Gate on the German ZDF Network’s New Year’s Eve Welcome 2018 TV show. Their Live In Berlin DVD spent 8 weeks on the German Music DVD top 30, peaking at #2, and achieved the #1 position in Amazon’s Music DVD chart.

The three began their friendship in the early 90s when they worked together in Sir Cliff Richard’s band. Since then, their remarkable careers have taken many twists and turns and include such names as Lionel Ritchie, Kylie Minogue, Jeff Lynne, Gary Barlow, Cher, EllieGoulding, Tina Turner, Sailor and Shakin’ Stevens . . . to name but a few.

Audiences delight in the fresh acoustic interpretations of hit songs that everyone knows and loves, each with its own story of the musical journey of the three musicians; a real up-close and personal experience, including songs such as The Hollies’ The Air That I Breathe & He Ain’t Heavy, Sweet’s Love Is Like Oxygen & Ballroom Blitz, and 10cc’s I’m Not In Love & Dreadlock Holiday as well as the Cliff Richard classics Carrie & Move It.

Add a few other choice songs into the mix from artists such as Roy Orbison and Sailor, along with some original material from the boys’ own catalogue and their debut album, scheduled for Autumn 2018 release, and you have the perfect evening’s entertainment.

Don’t miss FRONTM3N on this amazing musical journey with their first exclusive shows!

OTHER SHOWS COMING SOON TO MEMO