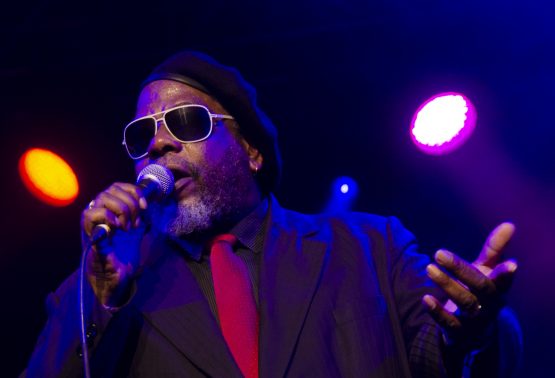 Pat Powell is one of Australia’s most accomplished vocal talents.

He’ll be collaborating with some of Melbourne’s finest for an afternoon of mesmerising funk, soulful jazz, and dancehall rhythms!

With a career that spans over four decades and right across the globe Pat Powell is the artist that everyone wants to work with, to name a few there’s Margaret Erlich, Jenny Morris, Paul Mac, James Freud & Michael Hutchence’s Max Q.
Hailing from the close-knit and highly musical Jamaican community of 1960s/70s Bristol, Pat toured extensively throughout Europe before descending on Sydney with great force in the 80s.
Filling bars and clubs across Australia with his pioneering acts Caribbe, Club Ska, LoveTown, Ten Wedge and Neptune St, within a couple of years he was one of Australia’s most in-demand studio vocalists.
Pat has supported James Brown, Queen, The Eurhythmics, Boy George, Crowded House, Spit Enz, Horace Andy and Luciano, Tina Arena, George Benson, and more. In the late eighties & nineties, he toured Australia, Asia & Europe as Kylie Minogue’s primary backing vocalist and since then in more recent years he’s toured extensively throughout Australia, Canada, America, Turkey, and the UK. Pat has recorded over 18 singles, featured on over seven albums, and as an actor been in a myriad of classic Australian films but finally here’s his debut album “About Time” released in June of 2018.
Pat Powell singing for The Melbourne Ska Orchestra has been nominated for 5 Aria’s and taken 2 of them home, plus 4 nominations for The Victorian Age Music Awards and won 3.

This is the only gig for ‘FUNKY SOUL SOUNDS’ w/Pat Powell & His Band, better be quick!

This is the only gig for ‘FUNKY SOUL SOUNDS’ w/Pat Powell & His Band, better be quick!