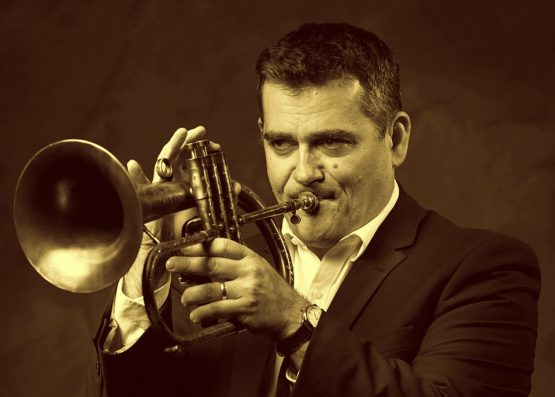 One of Melbourne’s most accomplished trumpet/flugelhorn players, Gianni Marinucci will come to the Ruby Carter Jazz Lounge with some of Australia’s finest artists to celebrate the music of Chet Baker.

Chet Baker was the star of the West Coast jazz scene, centred around Los Angeles, in the mid-1950s. In particular, his work with saxophonist Gerry Mulligan saw him win a legion of fans, attracted by his hip trumpet playing, his intimate vocal style, and his youthful good looks. As Bruce Weber’s documentary Let’s Get Lost showed, Chet enjoyed a long career, but one marred by physical and legal problems caused by his long-term heroin addiction. In his last career phase, his physical deterioration was shocking, but he still had that ability to play like an angel. In ‘Celbrating Chet Baker’, Gianni Marinucci plays many of the jazz standards recorded by Chet Baker. He also sings (in a soft, almost conversational style quite similar to Chet’s) many of the songs associated with Chet, like ‘My Funny Valentine’ and ‘Let’s Get Lost’. Gianni will be joined by Paul Williamson (alto/tenor sax),
Craig Fermanis (guitar), Tom Lee (bass) and Mike Jordan (drums).

One of Melbourne’s most accomplished trumpet/flugelhorn players, Gianni Marinucci has worked with a host of notable Australian artists, from James Morrison to Tony Gould, and has led his own groups ranging from a trio to a nonet (initially formed to play the arrangements from Miles Davis’ ‘Birth Of The Cool’ album).

He has always admired, and related to, the recordings of the late, great Chet Baker: in his view, “Chet was one of the great poets of the trumpet, and of jazz.”