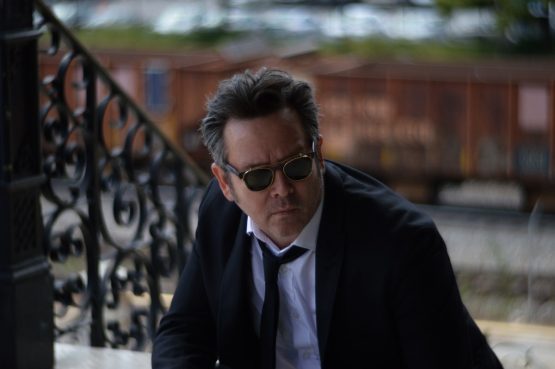 Over an extensive career Grant-Lee Phillips has earned a reputation as a songwriter’s songwriter – an artist who can deliver lyrical observations with a dry and evocative sense of time and place.

His gift for reconciling classic touchstones with an adventurous sensibility has distinguished his work since he first emerged as the front-man of the acclaimed trio Grant Lee Buffalo in the early ‘90s.

At once cinematic in scope and disarmingly intimate, his captivating solo career has explored a variety of modes. Whether it be the electronic inventiveness of Mobilize, acoustic interplay of Virginia Creeper, chamber-pop of Little Moon, meditative solemnity of Walking in the Green Corn, Nashville inspired The Narrows or his latest and most urgent work, Widdershins – Phillips is not one to rest on the accolades of the past.

He’s a riveting live performer who thrives onstage. Nevertheless, a new generation have discovered Phillips through his role as the town troubadour on the cult television hit The Gilmore Girls (both in its original run and the 2016 reunion.)

Speaking of his new album, Widdershins, Phillips sees a kind of parallel with his earliest work with Grant Lee Buffalo. “That was also a time of intense social anxiety. The Gulf War, the LA riots – everything became cranked up. Then a few years later there was the earthquake we lived through, which also made for a time of uneasiness. I was in a heightened state when I wrote that stuff – as I am now.”

As the past and present converge and the journey of Grant-Lee Phillips continues, his craftsmanship continues to blossom. In times of tumult, he awakens comfort and hope by shining light into darker corners. “I hope to express my faith in people, my faith in the good ideas we’re capable of, and that regardless of what opposition we face, the fact that we can surmount these things,” he concludes. “We can stare them down, laugh at them, belittle them, and drive the darkness back into a hole. Music is a way of kicking some of these giants out at the knees.”

With his Australian tour around the corner he reflects on his anticipated return…..“After so many years, I am finally returning for a proper tour of Australia this May. I’ll be joined by special guest Matt Joe Gow. I look forward to these shows and the welcoming spirit of Australia.” — Grant-Lee Phillips

OTHER SHOWS TO CHECK OUT @ MEMO!

This is the only gig for Grant-Lee Phillips (USA), better be quick!

This is the only gig for Grant-Lee Phillips (USA), better be quick!