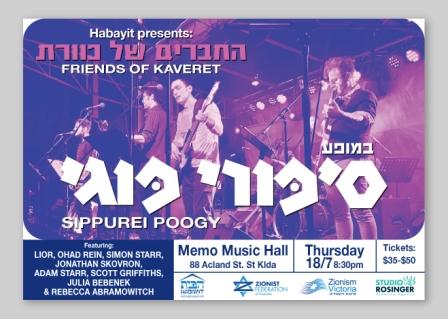 1970’s band Kaveret are widely revered as the Beatles of Israel. With an unprecedented run of hits and songs that have become standards, this rare combination of talent reached its peak with the release of their album ‘Sipurey Poogy’ in 1973.

This album combined 7 part vocal harmonies with sophisticated yet accessible instrumentation, yielding an album that truly captured the zeitgeist of Israel in the 70’s, to the point where one third of Israel’s population turned out for the launch of the album. All of the songs on ‘Sipurey Poogy’ have become part of the canon and textbook of Israeli music that are still being performed and emulated by today’s stars.

Following on from their exciting show in May, HaChaverim Shel Kaveret are going to perform the album in full as well as other important Kaveret songs, including songs not performed at their debut show.

This is the only gig for HaChaverim Shel Kaveret, better be quick!