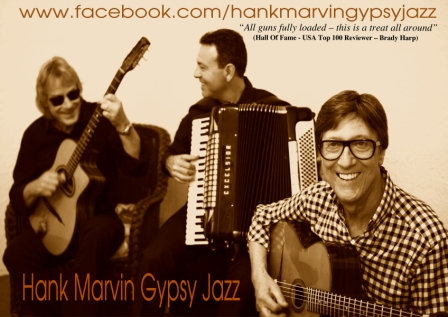 Guitarist Hank Marvin has achieved legendary status the world over.  From his early days with The Shadows, through to his forays into everything from rock ‘n roll to swing and gypsy jazz, his technical skill, precision and rhythmic integrity brings us music that invades the soul.

“ Marvin plays it as though it’s the only sound he’s been perfecting his entire life. Melodically and rhythmically the tunes and performances are sophisticated and sublime.” (Pop Culture Classics by Paul freeman)

“ Marvin stands well out on every cut, Taylor the true swingin’ rhythm section. Mondia sandwiched in between, but a guy who comes out with killer solos as well, complementing Marvin or carrying on the melodics – in essence, playing Grappelli to Marvin’s Django. Forget about me choosing a favourite track, as every single cut is dauntingly gemlike.” (Fame Review by Mark S. Tucker)

This is the only gig for Hank Marvin (The Shadows) – Gypsy Jazz, better be quick!

This is the only gig for Hank Marvin (The Shadows) – Gypsy Jazz, better be quick!