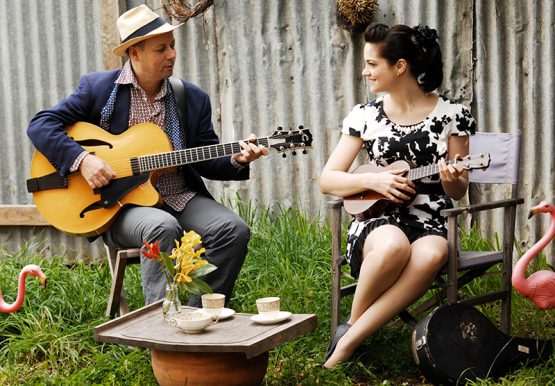 10 years after releasing “A Late Brunch On Irwell St”, HETTY KATE and SAM LEMANN return to the neighbourhood (although Sam never left) to share some of their favourite musical treasures.

The founding members of the sweetest string band in town, ‘The Irwell Street String Band’, will regale you with sparkling, sentimental and sassy songs plucked from the scrapbooks of Tinseltown, the well trodden paths of wartime Britain and the colourful beaches of South America. Voice, guitar, ukulele, double bass and some surprises, expect a beautiful repertoire stretching from the 1930’s to the 1950’s, carefully curated and arranged to be fresh and original, yet staying true to the memory of those that went before.

Always weaving a special magic when they play together, Hetty and Sam tip their caps to the popular jazz duo’s of the past.. Peggy Lee and Dave Barbour, Julie London and Barney Kessell, Mary Ford and Les Paul. Their first album garnered airplay on BBC Radio 4, and led them to the Wangaratta and Melbourne Jazz Festivals among many others. With a shared love of swing music and pretty songs, they have appeared on almost 100 albums between them, and have performed in all four corners of the world.

Now with each member of the original band living in different cities, it is a rare treat to hear these songs played in the neighbourhood where Sam and Hetty’s hatched their musical conspiracy back in 2008.. of course over long champagne brunches by the beach. They hope you enjoy the music, and come along to the show! Aloha.

OTHER SHOWS COMING UP AT MEMO

This is the only gig for Hetty Kate & Sam Lemann: Back to Irwell Street, better be quick!