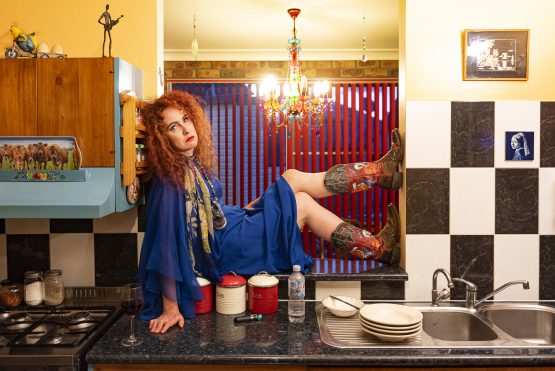 Owning the red hair and lipstick beyond persona, there is no doubt the crown has always belonged to Wanita as Australia’s Queen of Honky Tonk. Wanita’s third and most recent album ‘I’m Wanita’ was recorded by Billy Yates & Larry Beaird at world-renowned Beaird Studios, Nashville and it has been soaring her work to new music career heights, with performance bookings through until the end of 2021. This album has been proceeded by two albums, the first recorded at ‘The Pub’ in hometown Tamworth and the second at Garth Porter Studios, Sydney.

Being described in the Beaird recording studio as being so consistently good by US country music legend Billy Yates, it’s no surprise that Wanita’s voice is respected around the world. Excitingly for fans, Wanita’s most recent album ‘I’m Wanita’ reveals her life in a way that has never been disclosed through the words and notes of a song before, backed by a same name documentary that captures the essence of Wanita and her albums in moving pictures.

Wanita’s latest album has already been described as having ‘captured the dichotomy of Wanita’s life and torrid mood swings, her monumental stage presence, her exceptional vocal capacity and her deep connection with traditional country music,’ and realises the story of Wanita to date. It should be rightly noted though that Wanita’s mood swings are only brought on by being with people who display laziness, incompetence, racism, prejudice, and dishonesty.

Wanita has been the centre of a turbulent life, which undoubtedly is what makes her person and music so raw and real. Wanita experiences the world with an autistic lens, and like the rest of us in Australia, Wanita has been working to see her dreams come true at any expense – scraping pennies together, but still giving everything but the shirt off of her back to those in need. Wanita isn’t just a country music star, but someone who genuinely cares about people whether they live in of Tamworth or on the streets of Nashville. Though so down-to-earth, Wanita is far from every day, pushing with every ounce of her human being to live the life she has dreamed of as a world renowned star of Honky Tonk and country music, in the same way her idol Loretta Lynn has been since the 1960’s. The ‘I’m Wanita’ Album, will be the album, alongside the same-titled documentary, left as Wanita’s legacy to the world.

Having seen touring success across Sweden, and now the star of a world critically acclaimed feature-length documentary about her music and life (I’m Wanita, 2021) it’s been a mystery as to why Wanita has been a slow rising star, but through the reality of her everyday life, she has been unknowingly characterising as an excellent 21st century story and star, the real star this world has been looking for to sing our lives through Honky Tonk song.

Be sure to show your support to this magnificent red-hair, red-lipped, real and raw woman, who gives our lifetime new Honky Tonk music and the story of triumph over the struggle of your own everyday life.