Jo Jo Zep and the Falcons and Rock Doctors join forces for a memorial concert celebration for their much loved friend and bass player John Power. This is a fundraising event and all profits will be paid to John’s immediate family as a gift.

John Power died in November last year after prolonged health problems. He was a much loved man amongst Melbourne and Sydney musicians and music lovers alike. Over his nearly 50 year career he was best known as the bass guitarist/ singer in Jo Jo Zep and the Falcons but he also played and recorded with many other great Australian bands such as Company Caine , Foreday Riders, The Rock Doctors and the Hippos.

Friends of John wanted to pay tribute to him and when asked Joe Camilleri and Chris Stockley were keen to get on board and reform two bands that John was synonymous with Jo Jo Zep and the Falcons and the Rock Doctors for a one off concert in Melbourne..

Musicians, crew and all involved are volunteering their time and all proceeds will go to John’s daughter who cared for him in his final years.

*** As a further tribute to John a compilation CD with tracks from Company Caine, Foreday Riders, Jo Jo Zep and the Falcons, Rock Doctors and the Hippos will be given to all ticket holders on the night. ***

On the news of John’s passing tributes flowed on social media….

“Loved his company his wit and musicality…walked into each other’s lives not too much was said. John played bass and could sing in that world…he was the business.

I can hear him now…it’s 1976..singing Just To be With You…as all who knew him…I will raise a glass and play The Shape I’m In like we used to…with vigour and who’s up who and who’s paying the rent…my dear pal Johnny.”

Chris Stockley, formerly of The Dingoes, posted: “A big man, big sound, great voice and huge intellect. a great friend to Jenny and myself. I was also fortunate enough to share the stage with him many, many times in a number of different configurations, probably the best known, certainly in Melbourne, would have been The Rock Doctors. A fantastic band musically and about as much fun as you can have standing up. RIP, John. I shall miss our traditional (of 40 years) meeting up drink too. A bottle of Dom Perignon. Might be the most suitable drink for you tonight.”

Don’t miss this rare chance to see these two fabulous bands . It promises to be an extraordinary night! 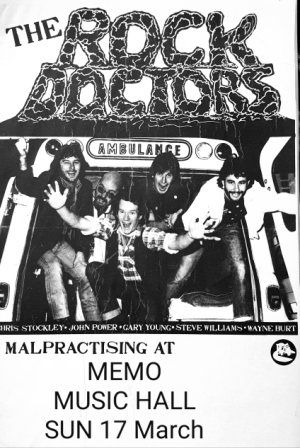 This is the only gig for Jo Jo Zep & The Falcons + Rock Doctors, better be quick!