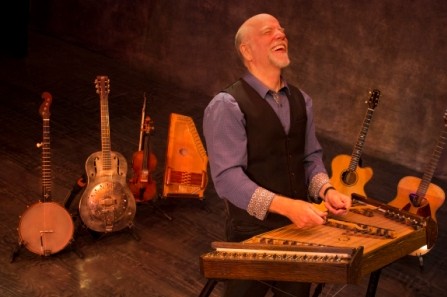 “The most impressive instrumentalist I’ve ever heard.” — Johnny Cash

Acclaimed singer-songwriter, instrumentalist, author and multiple Grammy nominee, John McCutcheon returns to Australia in March 2016  as a headline International guest at premier music festivals and concert venues.  The tour will feature the Australian release of two CD’s – “22 Days” and “Joe Hill’s last Will” plus classics from his extensive back catalogue.

John McCutcheon has emerged as one of the most respected and loved folk/ contemporary artists of the post war generation .
As an instrumentalist, he is a master of a dozen different traditional instruments, most notably the rare and beautiful hammer dulcimer. His song-writing has been hailed by critics and singers around the globe. His thirty five plus recordings have garnered every imaginable honour including seven Grammy nominations.

His exploration into the legendary figures of traditional Appalachian music imbedded a love of not only home-made music, but a sense of community and rootedness. The result is music…whether traditional or from his huge catalogue of original songs…with the profound mark of people and place plus a storytelling style that has been compared to Will Rogers and Garrison Keillor.

Besides his usual circuit of major concert halls and theatres in the US, John is equally at home on festival and concert schedules thru Nth America, Europe and Australia.

Despite his myriad recordings, it is in live performance that John feels most at home. It is what has brought his music into the lives and homes of one of the broadest audiences any folk musician has ever enjoyed. People of every generation and background seem to feel at home when John McCutcheon takes the stage, with what critics describe as “little feats of magic,” “breathtaking in their ease and grace…,” and “like a conversation with an illuminating old friend.”

John McCutcheon engages and involves audiences in a way that defies description and he  remains with concert participants eons beyond the last note of his magical song, story and music.

Kristina Olsen is one of the most entertaining and compelling performers on the international folk circuit. She is a  superb multi-instrumentalist (acoustic guitar, steel-body slide guitar, saxophone, concertina, mandolin and piano) as well as an award-winning songwriter with a big bluesy voice.  Her mix of powerful songs ranging from sassy bottleneck blues, lilting ballads, swing jazz to raunch and roll (as well as her hilarious storytelling) makes for a diverse and satisfying musical experience, on stage and on disc.

Born in San Francisco and raised in Haight-Asbury during the 1960’s, Kristina’s approach to music and life was formed by that environment of vital cultural expression, social activism and diverse musical influences. She now calls Venice Beach, Los Angeles home but rarely sees it from touring ten months a year.

Such respected artists as Eric Bibb, Fairport Convention, Maddy Prior, Mary Coughlan and Mollie O’Brien have covered and recorded songs by Olsen.

With a passion for touring her journeys and experiences ‘on the road’ have provided reams of  ‘fodder’ for song and story, much of which was incorporated into her 2012 release, “They Paid Us in Tub-Time’, a collection of stories with imbedded songs.

This is the only gig for John McCutcheon (USA), better be quick!

This is the only gig for John McCutcheon (USA), better be quick!