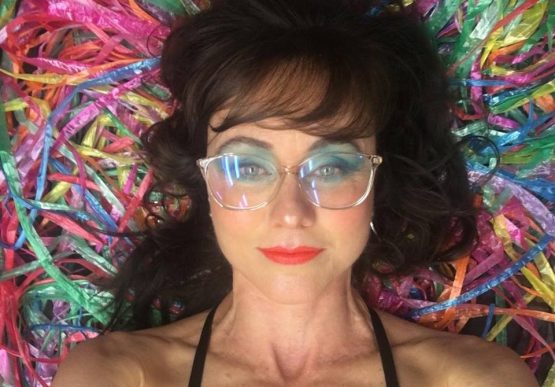 Feeling it has been too long since she last played Melbourne, Lara hits the Ember Lounge this May with her delightfully weird and pretty songs from her debut album PINEAPPLES, GREENBACKS AND GLITTER IN THE AIR.

Reeling and reckless at the end of a relationship, Lara Travis went and did what she feared and admired the most: she became a stripper on Melbourne’s notorious King Street.

The door to  everyday life quietly closed. And she descended into an endless, subterranean nocturne, where rooms and lives were swallowed in red and black chiaroscuro, suffused in smoke, cut through with a strobe, saturated in music and broken by flashes of glitter, diamantes and fluorescent lycra.  Amidst a spectacle of  embellished and augmented bodies, dramas were lived, night after night.

Pineapples, Greenbacks and Glitter in the air was written, arranged and produced by Lara Travis. Musically eclectic yet cohesive, the album touches on folk, blues, country and pop with baroque highlights throughout.  Down on King Street is the first single of the album. Within it’s distinctly Australian sound lies a commentary on a shadowy aspect of Australian culture, as an errant family man, bucks party revellers, dancers, bouncers and suburban boys come together in an evening that climaxes in violence and mayhem.

Pineapples, Greenbacks and Glitter in the Air represents Lara Travis’ quest to find meaning and connection in the face of life. A message in a bottle, so to speak, from the netherworld.

This is the only gig for Lara Travis, better be quick!