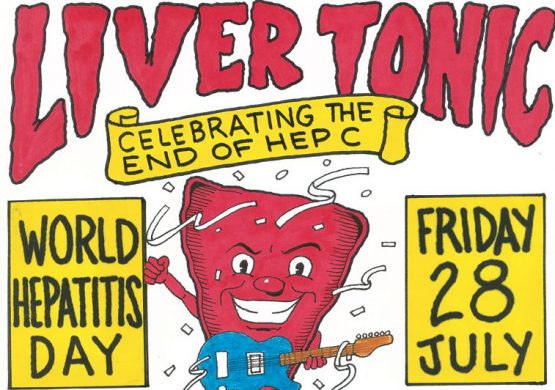 Harm Reduction Victoria invites you to celebrate ‘Liver Tonic’ with an all-star line-up of artists.
Through the years, Hep C has cut a swathe through our alternative culture – but its demise is now on the horizon.
It’s been a year since new treatments began curing people en masse, and Harm Reduction Victoria is calling you out to celebrate in the kind of atmosphere only MEMO Music Hall can provide.

We’ve put together an extraordinary cross-section of our inner-city music culture. Hugo Race with his attitude and flair, performing with Michelangelo Russo. The drama and intensity of Ron S Peno (Superstitions/Died Pretty) performing with Cam Butler. Plus those ‘pillars of spouse rock’ Harry Howard &

Edwina Preston with their ‘crunchy, laconic’ post-punk. There’ll be appearances by Steve Kilbey of The Church and comic Greg Fleet.
Last of all, we’re wheeling out The Peptides – ‘The world’s greatest punk rock pop covers band’ (with guests Sean

Kelly (Models) and The Ears, plus regulars Angela Howard and Rob Wellington of Winter Sun).

It doesn’t matter who you are. If you’ve been cured, or doing the curing. If you’re someone who needs that last shove into treatment. If you’re family or friends of someone who’s been touched by the virus. Or if you’re just there for the wonderful line-up – you’re all invited to share the love.

This is the only gig for Liver Tonic!, better be quick!

This is the only gig for Liver Tonic!, better be quick!