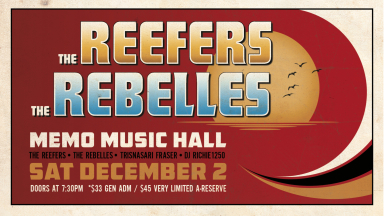 What happens when an immovable object meets an unstoppable force?

Find out when THE REEFERS go head to head with THE REBELLES in a titanic clash to decide once and for all who holds the Secret of Surf. For one night only MEMO Music Hall will play host to a cavalcade of surf, turf, and sixties sensibilities to rattle the halls of Poseidon himself.

Featuring the exotic oscillations of TRISNASARI FRASER and the wild style of RICHIE 1250, this promises to have hips shaking from the delta to the deep blue sea.

THE REEFERS are comprised of all of the original band-members:  Mama Sun Reefer, “The” Jack Norton, Evil Al Cordobez, Stonehawke and JT Reefer, they play a hybrid of traditional surf music and the rolling beats of the middle-east.

THE REBELLES show us the way, through their original girl-group-greatness, combined with classics such as “The Clapping Song.” They’ve wowed audiences from Melbourne’s White Night to The Community Cup.

Sharing in the middle-eastern groove, TRISNASARI will join Matt and Jack once more to shimmy and delight the audience on the dance-floor.

The ship shall be expertly captained by RICHIE 1250, as he navigates the salty richness of some of the best surf and summer tunes, to keep the celebration going on the dance floor and at the bars. Usually found in the studios of PBS FM and his own Slow Grind Fever events, we thank him for joining us.

SEE YOU UP THE FRONT!

This is the only gig for The Reefers vs The Rebelles, better be quick!