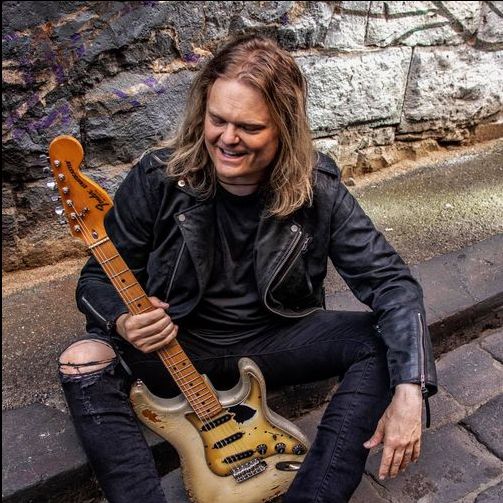 Scott Darlow is an Aboriginal man from Melbourne Australia. Scott’s family (mother’s side) hail from Yorta Yorta country, (Echuca, Shepparton) and his fathers side are originally of convict descent from Tasmania. He is a full time singer and speaker with 2 distinct arms to his professional life.

The first part of Darlow’s professional life is as a recording and touring artist. If you listen to rock radio in Australia, you would have undoubtedly heard Darlow’s music over the last 4 years. Scott has had 6 songs played on high rotation nation wide on rock radio during that time, and in fact this year has had 2 singles (“You can’t see black in the dark” and “Bind the hands of time”) gain him nation wide exposure. During this time, Darlow has also toured nationally, headlining his own shows and also supporting the likes of Jimmy Barnes, Diesel, Jon Stevens, Eskimo Joe and many more. Scott has also played a number of Mau stage festivals around Australia over the last few years.

The other half of Scott Darlow’s professional life is as an educator and advocate. Prior to being a full time artist, Scott was a high school teacher and for the last 10 years, Scott has used his music to connect with 50,000+ students in 100+ schools a year all over Australia, Asia and Europe. Darlow’s sessions see him use his gift for story telling, his love of history – both documented and also the stories of his elders – to help audiences understand better all the things that have happened and contributed to build the current Australia we all share. Darlow’s belief is that education brings understanding. Understanding brings empathy, and empathy brings healing and change. Darlow is proud to be a World Vision Australia artist.

An evening with Scott Darlow will see Scott play solo acoustic versions of his songs, and in between songs, share his knowledge on Australia, the history of this country, his First Nations culture and his heart for reconciliation. These shows will be more than “just a gig”. Rather, audiences will feel like they’ve had not only a fantastic musical experience, but an entertaining, educational conversation with a gifted, intelligent and very funny artist/educator as well.