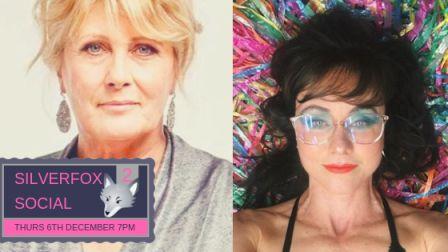 It’s a party AND a gig! Silverfox Social: Round 2 is going to go off like a frog in a sock, with DEBRA BYRNE and her new band Cornerstone and the artist who slayed the room in Round 1, LARA TRAVIS, plus DJ SILVERFOX and other acts TBA. Come with friends, or come on your own and make new ones. Oh, and take the next day off work!

“I am thrilled to have formed the band CORNERSTONE with Dion Hirini on guitar Chris Paraha on bass, Vashti Sevill on keyboard and Nick Karasavvidis on drums and me on lead vocals”says Debra Byrne. “The name CORNERSTONE epitomises what music has been and always will be for me. It’s the experience that brings me joy, friendship, love and emotional and mental stability. Music, and especially singing, is my yoga. Twenty years ago, Dion, Chris and I played together at the Zbar in Prahran on Sunday afternoons. Those sessions sparked the beginning of a freedom and camaraderie I had not felt before and I have longed to return to the musical genre where I feel most at home and most myself”.

CORNERSTONE marks a return to that home with songs from The Eagles, Bonnie Raitt, Steely Dan, Michael McDonald and James Taylor.

LARA TRAVIS will also be a special guest on the night performing songs from her new album ‘Pineapples, Greenbacks and Glitter in the Air’, transporting us to a netherworld where the discarded soul of a murdered girl sings for vengeance and suburban boys punch on with bouncers in a meth-fueled street fight. Then there’s the stripper who takes down her customer in a kaleidoscope of gore. A delicate flower, with a stem of barbed wire. Lara explains,“The album is a nocturne. The songs were written between midnight and 5am and they are about a life lived between those hours. This album is my howl at the moon.”

This is one event to mark on your social calendar folks!

This is the only gig for Silverfox Social: Round 2, better be quick!