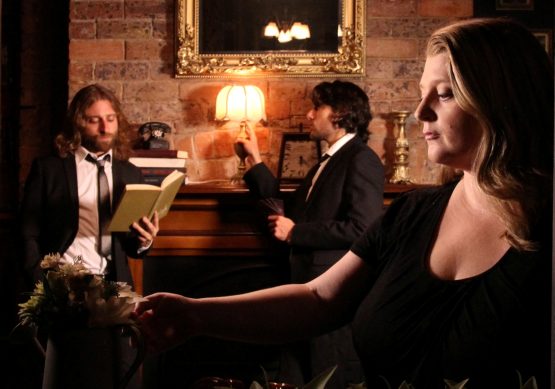 “This music seems simple at first—lullabies and love songs, laments and dances—but it is drawn from such a deep past and refreshed by such vocal purity and sophisticated playing that it grows richer and more enchanting with every hearing.” – Helen Garner, Author

The Bashevis Singers are the children of generations of people who lived their lives in Yiddish. Husky Gawenda and his cousin Gideon Preiss are renowned Australian musicians and award winning song-writers. They are the core members of the critically acclaimed band HUSKY. Husky’s sister (and Gideon’s cousin) Evie is a teacher and award winning theatre director who is known and loved for the beauty and warmth of her voice.

The album they have recorded is a unique labour of love. The songs span almost a century. Some are classic Yiddish folk songs written by legends, at a time and in a place long gone. Some are poems set to music, written by the great Yiddish poets of Eastern Europe and America. These are songs of love and sadness and life’s joys and disappointments.

There are two very special songs on this album. They are songs by the well-known journalist and writer Michael Gawenda, and his son Husky Gawenda. Performed on the album by The Bashevis Singers, these songs are a sort of gift to their past and a proclamation of faith in their future.

The Bashevis Singers will be joined on the stage by some of Australia’s finest musicians for a concert which will showcase the unique beauty of their album.

OTHER SHOWS AT MEMO THAT MAY BE OF INTEREST

This is the only gig for The Bashevis Singers – Album Launch, better be quick!