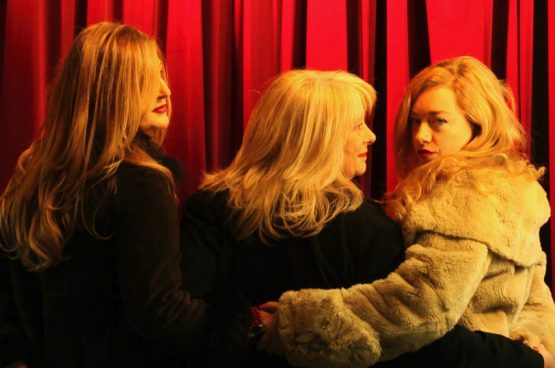 What better way to spend Mother’s Day, than with the gloriously harmonious combo of mother, daughter, aunt, cousin that is THE DUSTY MILLERS

MEMO Music Hall in St Kilda, (the Mother of all Melbourne venues!) welcomes back The Dustys for an extra special Sunday afternoon show. All established artists in their own right, Lisa Miller, Tracey Miller and Loretta Miller will be joined on stage by guitarist cousin, Sam Leman and accomplished musical friends Tamara Murphy on double bass and Jen Anderson on violin. Seats aplenty at this gorgeous venue. A treat for all!

ABOUT THE DUSTY MILLERS

THE DUSTY MILLERS are the combination of three very different and interesting Melbourne musicians, all with their own names and musical history.

They happen to be from the same family and have finally come together to share their gift.

Lisa Miller has what every singer strives for – a voice of her own. She does more than just deliver words and a tuneful melody, she gives the songs she sing a colour and a pathos that is utterly distinctive. There are very few others with the ability to convey such a degree of soulful emotion, and who are able to write songs that cut so close to the heart of the matter. To listen to Lisa Miller is to hear your very own story put to song.

Since the release of her debut album in 1996, Lisa Miller has received consistent and unanimous praise from reviewers across the board, and earned a place as one of our very finest musical artists. Miller was a final-five nominee for the Best Female Artist ARIA Award in 1999 for her second album As Far As A Life Goes, in 2003 for Car Tape and again in 2004 for Version Originale. Along with nominations for Best Independent and Best Adult Contemporary Album, and Producer Of The Year, she has altogether been nominated 9 times for solo ARIA awards. Morning In The Bowl Of Night was nominated in 2007 for Best Album and Best Female Artist in the EG awards.

Tracey Miller, also known as “The Gospel Queen of Melbourne”, has been teaching Gospel choirs and singing country, bluegrass, jazz, rhythm & blues and even calypso and Hawaiian music around town with Melbourne’s finest players forever. Tracey Miller writes what used to be called “strong women’s songs” – songs that deal in the day-to-day relationships between ordinary women and their loved ones, in the country music tradition of female songwriting greats such as Dolly Parton and Loretta Lynn. It’s no coincidence that one of Miller’s three daughters is called Loretta. And like her songwriting heroines, Miller is a woman who doesn’t fit the stereotypical mould.

Loretta Miller is the daughter of Tracey and the niece of Lisa. She has grown up with their music and performed with them from a young age, but also has a voice and style of her own. Most notably she toured the world 4 times over as a member of the dynamic 9 piece soul outfit “Clairy Browne & The Bangin’ Rackettes”. Now focusing on her other outfit JAZZPARTY which takes over venues around the City late and loud on a Monday night, she also found time to do a Patsy Cline tribute show performed at Mullumbimby Music Festival two years running and at the Caravan Music Club to rave reviews.

Together they are THE DUSTY MILLERS and there is nothing better then listening to these three unique voices blended into perfect three part harmonies, giving classic songs a beautiful twist and breathing new life to some of Lisa and Tracey’s original songs.

OTHER SHOWS TO CHECK OUT AT MEMO

This is the only gig for The Dusty Millers Mother’s Day Show, better be quick!

This is the only gig for The Dusty Millers Mother’s Day Show, better be quick!