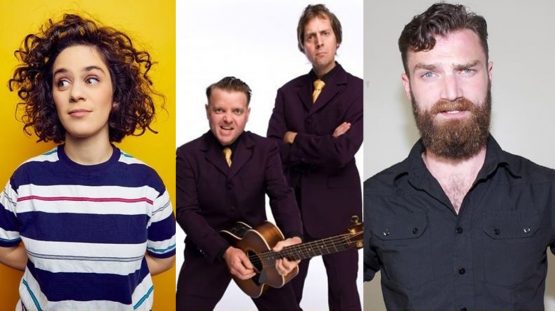 The Laughter Party is a showcase of three of Australia’s finest and funniest musical-comedy acts.

A rare appearance by one of the legendary acts of Australian Comedy. Known for their super-tight harmonies, musical prowess and hilarious lyrics, Rusty Berther and John Fleming have performed over 4600 shows around the world including festivals, comedy clubs, theatres, universities, corporate events, children’s shows, countless television and radio spots, and everything in between.

Hugely popular at the Melbourne International Comedy Festival, Adelaide Fringe, and the Edinburgh Fringe, the ARIA award winning Scared Weird Little Guys played one of the largest comedy gigs of their career when they performed for 45 minutes warming up the 90,000 strong crowd at the closing ceremony of the 2006 Melbourne Commonwealth Games.

★★★★★ “Talented, hilarious, genuine. These songs are not only funny, but also infinitely better composed than many of the songs on commercial radio” – The AU Review

Ryan Coffey
Ramshackle raconteur and rock-comedy Lothario, Ryan Coffey’s unique style has gained him notoriety around Australia and abroad as one of the most exciting and inventive comedians to come out of the Melbourne scene.

Coffey combines his incisive comic eye, his blistering guitar skill, his howling vocal talent, and his mastery of the loop pedal to create hilarious anthems to everyday life. His breadth of skill has made him a darling of both comedy and music festivals alike.

To keep updated about all plans for future Live Streaming concerts @ MEMO, go to MEMO’s Facebook Page in the short-term and website for updates.

PLEASE VOTE FOR MEMO HERE FOR THE ‘TIME IN AWARDS’