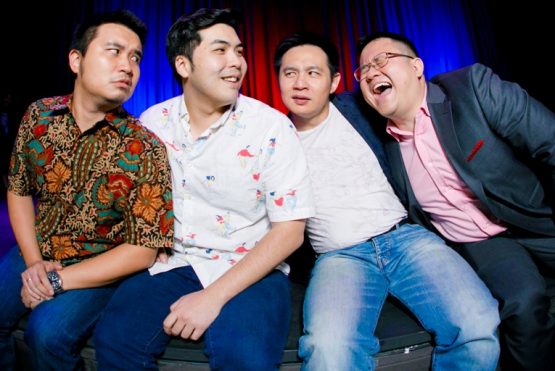 Coming to MEMO and Australia for the first time Malaysia’s favourite comedic quartet, THE MALAYSIAN ASSOCIATION OF CHINESE COMEDIANS celebrates its 10th Year Anniversary! With their longest and biggest tour in history.

DR JASON LEONG
Having completed his largest international solo tour to date, hitting sold out shows in Adelaide, Perth, Brisbane, Sydney and Melbourne, Dr Jason Leong has earned many accolades, proudest of which being the first Malaysian to win the 7th International Hong Kong Comedy Competition and gained 20 million views on his viral clip on Whatsapp group culture.

“Manages to transcend the typical Malaysian tropes, while still never losing the provenance of where his humor took root.” ⭐⭐⭐⭐⭐ Coconuts KL

“It is easy to see why Leong is such a hit with Malaysian audiences — at the heart of it all, he is a gifted storyteller.” ⭐⭐⭐⭐⭐ The Malay Mail

PHOON CHI HO
Dubbed the Cerebral Assassin, Chi Ho’s brand of non-sequiturs, puns, absurdist humour and dark comedy has flipped the expectations of what a Malaysian stand-up comedian can be. A prolific actor,producer and director, Chi Ho is a name to watch, as he makes his Australian debut.

“Took only seconds to draw the first echoes of laughter.”– The Star Malaysia

KUAH JENHAN
An eternal hopeless romantic, Jenhan brought a silly romantic and comedic story of his tryst with an Uzbekistan lingerie model to life with a poignant coming-of-age stand-up comedy show, Electric Butterflies, which garnered critical acclaim, in vein with all his previous outings in the Australian comedy scene since being invited to perform for the inaugural Comedy Zone Asia by the Melbourne International Comedy Festival.

“Jenhan is quite the engaging story-teller… you’ll leave with a soft spot for this modestly-spoken comedian.” – Chortle (UK)

DOUGLAS LIM
All hail the King of Comedy Malaysia! Since becoming a household name as a star in Malaysia’s hit sitcom, Kopitiam, Douglas Lim has made waves internationally as a stand-up comedian, earning rave reviews at the Melbourne International Comedy Festival for 3 years running and has performed regularly at their prestigious Gala shows.

“One of the funniest comedians at this year’s Melbourne International Comedy Festival.” ⭐⭐⭐⭐⭐ Funny Tonne, AUS

This is the only gig for The Malaysian Association of Chinese Comedians, better be quick!