Doors open: 7.30pm, Showtime: 8.40-11pm (with intermission). Due to popular demand, there will be a large dancefloor! 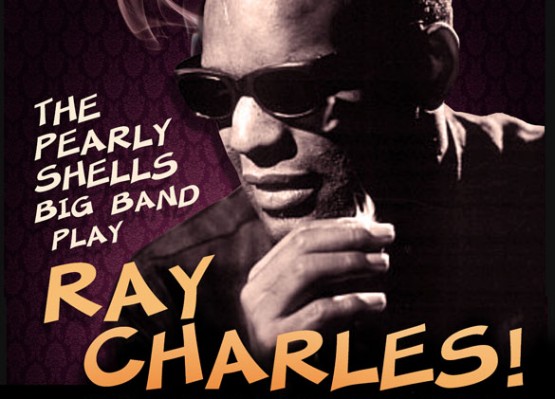 The Pearly Shells have always had a special place in their collective hearts for the genius of  Brother Ray Charles. From his early jump blues recordings thru to  his big RnB hits and fabulous big band records, not to mention his forays into jazz and a hugely successful country-crossover, Ray Charles did it all better than just about everyone else.

The Pearlys have been playing Ray Charles since the inception of the band and realised they have more than enough to material to play Ray Charles all night.  And they will – after three great nights at MEMO for the “Atomic Jamboree” and  “Friday Night Fish Fry – The Music Of Louis Jordan” and “The Pearly Shells Summer Ball”  The Pearlys Shells Big Band are returning to the “home of Happy feet” on Friday 20th May with very special guests the wonderful YVETTE JOHANSSON (star of last 2013 single “The best things in life are free“ ) & ASH GAUDION (The Shuffle Club), KERRI SIMPSTON &  backed by the full PEARLY SHELLS BIG BAND.

As Melbourne’s favourite Swing and Jump blues dance band, The Pearly Shells  describe MEMO Music Hall as one of the the best dance venues around and are looking forward to returning there once again.

Doors open: 7.30pm, Showtime: 8.40-11pm (with intermission). Due to popular demand, there will be a large dancefloor!

This is the only gig for The Pearly Shells Big band play Ray Charles, better be quick!

This is the only gig for The Pearly Shells Big band play Ray Charles, better be quick!