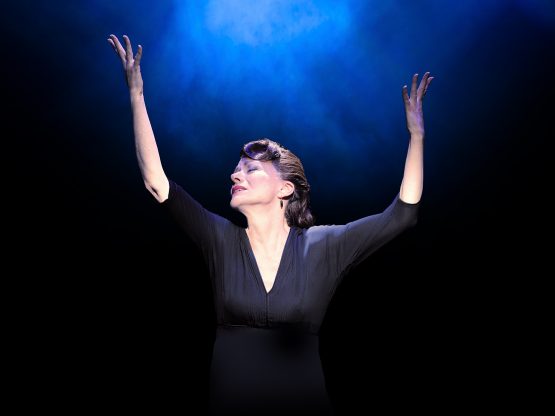 BERNADETTE ROBINSON’s performances in her solo show Songs For Nobodies at London’s Ambassadors Theatre last year earned the show an Olivier Awards nomination and announced her as a new star on the West End. Following the acclaimed season, she recorded her new album, Songs of Bernadette, during two premiere live concert performances at well-known London venue The Pheasantry. On Sunday 28 June Bernadette launches her new album in her debut live-stream performance from MEMO Music Hall.

“I had a blast last year recording this album in London over two live concerts at The Pheasantry. We also performed the album at two other great London venues, Brasserie Zedel and The Ivy Club. A stack of famous people turned up, including Sandi Toksvig, Maureen Lipman, Phyllis Logan, Kathy Lette and the Oscar and Tony Award winning lyricist Don Black. I really felt like I’d gone to heaven and I can’t wait to launch the album in Australia on 28 June at another iconic venue, MEMO.” – Bernadette Robinson.

Bernadette’s performances in Songs for Nobodies have always delighted Australian audiences and critics alike, in 2019 London’s broadsheet papers raved: The Times called her “A jaw-dropping talent”; The Daily Telegraph, commented of her portrayal of Callas singing Vissi D’arté from Puccini’s Tosca, “It’s so sublime, it’s like a shot of morphine; for a blissful few minutes, all the cares of the world are gone.”

Songs For Nobodies was commissioned specially for Bernadette by the Melbourne Theatre Company and written for her by Joanna Murray-Smith, it premiered in 2010.

In 2017 and 2018, Bernadette co-wrote and performed The Show Goes On, a new solo piece, at the Sydney Opera House and Arts Centre Melbourne. Again, she received overwhelming critical and audience acclaim: “Robinson is an indomitable force on stage. Her magnetism, acting skill and that fabulous voice – voices, really – should leave all comers astonished and mightily impressed” (The Age). “Robinson is a dumbfoundingly great musical theatre performer and as we watch her, our jaws dropping, we can’t see how she does it.

We are getting a lot of enquires about our Live Streaming and we want to look after our MEMO faithful so book sooner than later to help ensure you have sorted any technical issues prior to the live stream date/time and ample time to receive your confirmation email with link and password.

This is the only gig for Bernadette Robinson in ‘Songs Of Bernadette’, better be quick!