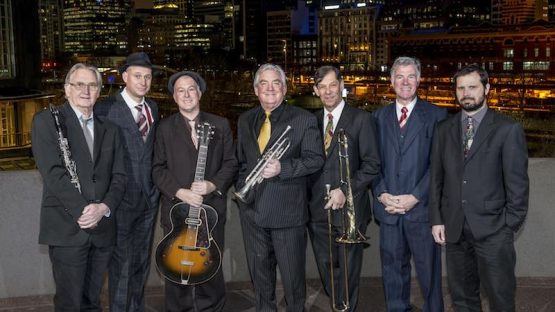 Fresh from their European tour, join The Syncopators as they launch the new RUBY CARTER LOUNGE (upstairs from the MEMO Hall) celebrating the roots of jazz with its most influential figure, LOUIS ARMSTRONG. Covering Louis’ jazz classics and hits, exploring the music ‘Satchmo’ created from the beginnings of America’s new art form in the 20s and throughout his lengthy career, which lasted five decades.

Formed in 1984, Chris Ludowyk handpicked the cream of Melbourne’s jazz talent to form the ‘Society Syncopators’. Now known as ‘The Syncopators’, they achieved the pinnacle of Australian jazz within a few years.

By excelling at the music they love and loving the music they excel at, they are recognised as one of the leading classic/mainstream jazz groups in Australia by critics and jazz fans alike. Arguably they are regarded as the leaders in their field in the world. This, plus their superb musicianship, stage presence and a keen sense of humour invariably draw standing ovations worldwide.

This is the only gig for The Syncopators’ Tribute To Louis Armstrong, better be quick!