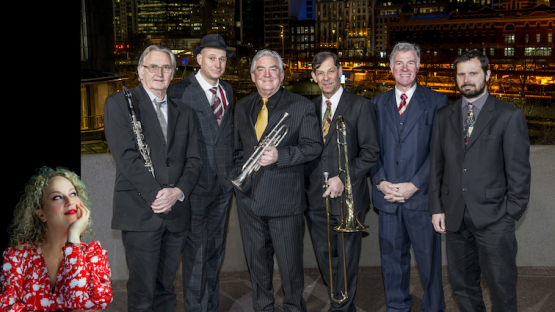 The Syncopators, together with rising star – vocalist Tamara Kuldin – will take you on a sentimental journey through the classic jazz era, sharing vintage love songs and party tunes. Performing the hits of timeless legends such as Louis Armstrong, Ella Fitzgerald, Billy Holiday, Sarah Vaughn & many other jazz greats, this elite band will rework many classics.

Enamoured by the romance and sophistication of the golden era of song, acclaimed Australian vocalist Tamara Kuldin has been captivating audiences from Melbourne to Europe with her playful, sultry and heartfelt interpretation of songs from The Great American Songbook, French chanson classics to lesser known vintage jazz & blues gems.

Formed in 1984, Chris Ludowyk hand picked the cream of Melbourne’s jazz talent to form the ‘Society Syncopators’. Now known as ‘The Syncopators’, they achieved the pinnacle of Australian jazz within a few years. With their versatility (the guitarist plays banjo, the bassist plays tuba, the clarinettist plays alto and tenor sax and the trombonist plays bass), they cover a wide range of styles and material. The vocal harmonising talent of the front-line also lends itself to the performance of ‘popular jazz’ material a la ‘Mills Brothers’ and ‘Boswell Sisters’.

This is the only gig for The Syncopators – Featuring Tamara Kuldin, better be quick!

This is the only gig for The Syncopators – Featuring Tamara Kuldin, better be quick!