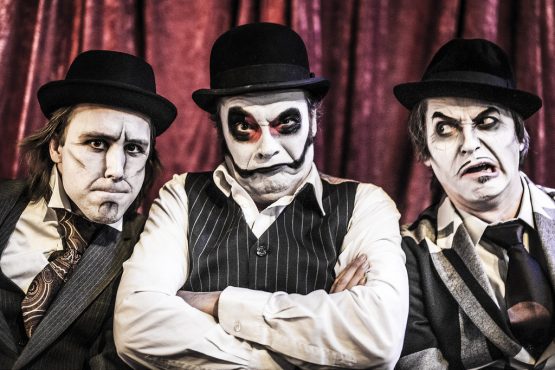 THE TIGER LILLIES present their fiercest, filthiest tunes for the perverse pleasure of fans old and new. Mean, moody and magnificent – if hell had a house band, it’d be The Tiger Lillies. The cult musical three-piece from London have been unleashing their riotous cabaret, music hall antics and bar room brawl songs on audiences the world over.

Led by the accordion-wielding ‘Criminal Castrato’ Martyn Jacques, the Grammy-nominated group are returning to Melbourne for one night only, with a show of wild emotion, featuring the greatest and worst songs of their 27-year career. Prepare to be enthralled by the darkly funny music and bizarre beauty of The Tiger Lillies at Memo Hall.

The Tiger Lillies shock, amuse and entertain in a postmodern vaudeville way, with their inimitable in-yer-face shows, where no limit should be taken for granted.
– See more at: https://www.tigerlillies.com/band/history#sthash.OHDhJFtP.dpuf

Just brilliant and utterly fantastic!! You’ll never hear more perverse and twisted as well as haunting and sorrowful songs.
Just get a ticket by hook or by crook, if there’s any left (which I doubt) and catch them while you can. – Marc Almond

This is the only gig for The Very Worst of The Tiger Lillies, better be quick!

This is the only gig for The Very Worst of The Tiger Lillies, better be quick!