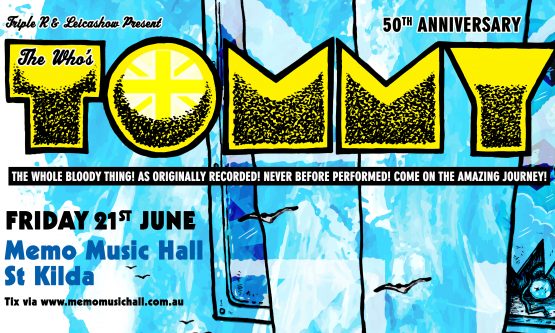 TIM ROGERS, DAVEY LANE, ASH NAYLOR have put together an all-star band to celebrate the 50th anniversary of The Who’s break through album of 1969, “Tommy”, which they will perform in June as “Captain Walker’s Unborn Children”.

The Pete Townsend-penned masterpiece “ropera” (sic) about the deaf, dumb and blind kid, has been represented in theatre, film and of course, live performance by “The ‘Orrible ‘Oo”, but never in its full track listing sequence. That’s about to change, when Captain Walker’s Unborn Children bring “Tommy” to life St Kilda’s MEMO Music Hall on Friday, June 21.

Says Rogers, ‘Captain Walker’s Unborn Children want to pull the pinball and light up the whole bloody thing. No theatrics, no script, just Tommy in its entirety.’

After seeing Tommy done in various states of theatre and film, Captain Walker’s brood wanted to revisit the power and atmosphere of the original LP – Meaty, Beaty, Big and Bouncy!

This is the only gig for Tommy – 50th Anniversary Performance, better be quick!