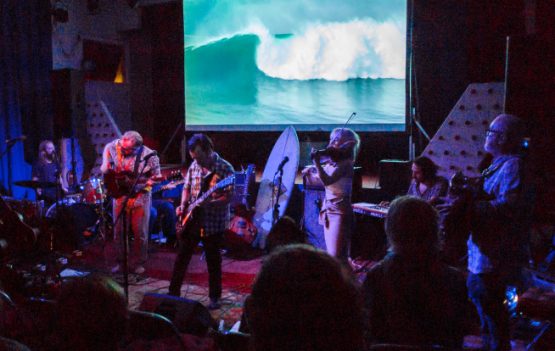 A film by Stephen L. Jones
True Flowers From This Painted World
Music by HEADLAND

A special charity fundraiser with proceeds going to
Make-A-Wish Australia.

Brought to you by

The creators of the film ‘El Mar, Mi Alma’ and the LP Headland sound/track have collaborated on a new visual album centred on the Lennox/Byron coastline.

HEADLAND began in 2013 as a soundtrack to a collection of super8 film pictures depicting surfing and coastal culture in the 1970s. Contemporary footage by award winning filmmaker STEPHEN L. JONES, ‘El Mar, M i Alma’ (2012), overscores each composition for their second full -length release. This fine art collaboration is performed as a visual album, consisting of original musical scores played to projected film sequences.

Amanda Brown – well known as the violinist for The Go-Betweens and more recently as a soundtrack composer working in feature films and documentaries.

Les Dorahy – A well-regarded visual artist and instrument maker, since 2006 Les has operated the Nashua Road recording studio and in recent times his creative interests have been directed towards the accordion, composition and audio engineering.

Ken Gormly – ARIA award-winning bassist for The Cruel Sea and curator of a remarkable collection of oddball guitars.

Murray Paterson – Best known as a musician/composer working with Tex Perkins and The Dark Horses and his compositions for Tex, Don & Charlie. In 2009 he and Perkins also collaborated on a film score for Rachel Ward’s feature film Beautiful Kate.

Joel Silbersher – Singer/guitarist for seminal Australian rock band GOD who had an enduring hit with My Pal, written by Silbersher. Joel went on to form Hoss and Tendrils (with Charlie Owen). As a solo artist he released Greasy Lens in 2002.

This is the only gig for True Flowers from this Painted World, better be quick!

This is the only gig for True Flowers from this Painted World, better be quick!