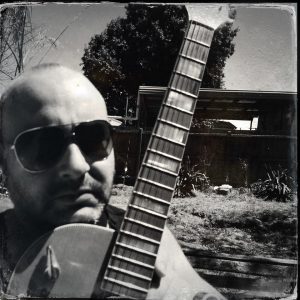 1. You are about to launch your new album ‘Words Fail’ …. Tell us how the album came about, what was the creative process?

This album is the accumulation of an idea that had been boiling away in my mind for the last 7 years or so… It took the prodding of a couple of close friends who thought it seemed to be the most natural thing to do.

I had been posting some little bits and pieces on Facebook(mainly just to stay in the public eye)and was receiving some pretty favourable responses from corners of the industry that i don’t usually dwell in.

It is, quite literally a solo improv guitar album, so preparation was not really needed. All i had to do was turn up and “turn up”.

2. Where or who do you draw your inspiration from when writing or playing music?

I draw inspiration from anything good.. that includes paintings, films, feelings, memories, sounds… My mind holds onto certain images and i think that i try to play whatever i imagine that to sound like. Then there are also the the gigs i do where i need to fill a certain role, and that is fine, but i’m very rarely “let off the leash”. For some performers, parameters work fine, but i like to wander a bit. I generally try to play “what i hear”. I’ve reached a point where my style is my own and i’m always on the lookout for new inspiration but i like to please myself and that is where this album sits. The more you get to be yourself, the less you care about meeting others expectations.

3. Over the years, you have collaborated with a bunch of renowned musicians on and off the stage, tell us about your most memorable experience?

Ah… When i was doing “Man In Black” with Tex and that mob, we were playing 2 sold-out shows at the Opera House and i made sure i was there 2 hours before anyone else so that i could just stand on that stage and play guitar to myself… I’ve got lots of good memories… Sitting side stage and watching Richard Thompson when Chris Wilson and i were supporting him… Hearing Russell Morris winning the ARIA for Sharkmouth and Red Dirt, Red Heart. Getting a compliment from master indian musician V.M Bhatt is about as good as it gets.

CLICK BELOW FOR MORE INFO ABOUT SHANNON’s ALBUM LAUNCH: 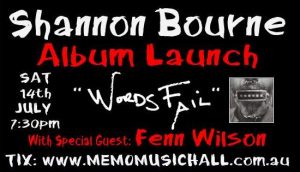