WINGSPAN TALK ABOUT McCARTNEY AND THEIR UPCOMING SHOW!

The boys from Wingspan tell us about their band, their upcoming show and their experience of seeing Paul McCartney perform live!

Q1. How did the ‘Wingspan’ show come about?
We realized that there were plenty of Beatles Tribute bands out there and that no one had covered his Wings Era from 1971 – 1981.

Q2. Did any of the band members get to see Paul McCartney perform recently when he was in Australia?
Yes we all went on the first night and were blown away with the show’s content and how he communicated with the audience.

Q3. What can the audience expect with your upcoming show at MEMO Music Hall on SUN 27 MAY?
They can expect a show with all his Mega hits from his Wings period and signature Beatles hits plus some surprises including rare video footage. 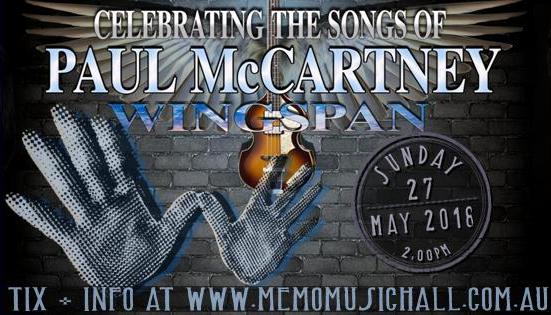